Just a note to the forum for anyone that uses the MiSTer board (https://github.com/MiSTer-devel/Main_MiSTer/wiki), I have updated the Emulator to a more stable version which supports full tape read/write and APSS on the MZ80B. It still only outputs VGA, not HDMI but at proper VGA 60Hz frequencies now.

For the HDMI part, you need to use the new custom HDMI (i.e, not the old IP which is not free). Most cores are moving to that new free HDMI.
Top

Is that core upgraded to the last MiSTer version?
Top

I didn't realise the HDMI had changed to a free custom version, I will investigate this and add it into the emulator.

I stopped real development on the emulator when Sorgelig didn't approve of my custom menu's taking up too much space in the Main binary for an 8bit machine and I then went off into the wilderness investigating soft cpu's. As an educational journey it was invaluable as I've learnt quite a bit but it meant the emulator stagnated. I will start to pick up and advance it now that I have the ZPU available.

I have placed in the core releases folder the latest RBF file and MiSTer binary (up to date as of 29/4). I will today fetch any Main_MiSTer changes since 29/4, merge my code and make a Pull Request, so expect the main MiSTer binary release to have my changes within a few days.

Thank-you again for the information, I probably wouldn't have found out about the free HDMI for quite some time!
Sharp MZ/X Series Projects and FPGA Emulator
engineers@work : https://eaw.app/sharpmz-series/
Top

Interesting. I have a SiDi (more like a MiST / Mistica than a MiSTer), so it would be nice if a future version could run on different hardware models.
--
Torfinn
Top

Ah Sorgelig... he's not known as a diplomatic person. If he's not interested in something, it's an impasse. Recently, there were clashes between him and big contributors even when they usually refrain to do so. So, if I undestand well, you will keep MiSTer menu minimalistic and have a ZPU to handle your MZ menu.
Top

Hi, yep that is the plan - small steps though, Im currently working on the tranZPUter SW which uses the K64F CPU controlling the real SharpMZ80a hardware. Code written and knowledge gathered will go into the ZPU on the emulator. I've put the ZPU into the emulator already and slowly advancing it's functionality.

My view of MiSTer is that it is Sorgelig's project and I'll fit in best I can to run the emulator on the MiSter but it would have been very simple to have a fork-exec to a specialised binary should a developer need one, the HPU on the MiSTer has more than adequate memory for this - the plus side though is that the emulator with the ZPU should run on other hardware, I've tested it so far on Cyclone IV, V and 10 FPGA boards and one day (hopefully soon) will get it running on the Zynq 7000 board from Xilinx.

@tingo: The SiDi board looks very nice, the only issue is the size of the FPGA - logic elements/ALM is sufficient for the emulator it is just the size of the internal BRAM which is only 756Kbits - I used a good portion of the resources of the Cyclone V BRAM for video, cpu and tape caching, (3mbits) so I will need to consider making use of the SDRAM instead. I will keep it in mind though to cut down on BRAM usage, conditional compilation will help, rather than having one sof/rbf emulating all the machines, compile it with flags so it generates a sof/rbf per machine, savings would be made on video ram and ROM etc. Food for thought, but yes, I would like to run it on other hardware.
Sharp MZ/X Series Projects and FPGA Emulator
engineers@work : https://eaw.app/sharpmz-series/
Top

Glad to hear you again. I really like your realisations on the real MZ-80 A (I have one but it needs to be fixed). Since I have a MiSTer and I would like to stick to the official cores and so the official main core, I'm glad there would be an official MZ core or - better - official cores (I indeed prefer a separate core for each MZ machine).
Top

Thank-you, that is appreciated.

I have come to the conclusion it is best to separate out the emulators for MiSTer with them sharing a common hdl code base, preserving a combined emulator if possible (for my own use). I'll look into doing it for the next release on MiSTer before completing the embedded ZPU.

Below is a project I started last year with MiSTer but havent quite finished it, It works but needs the keyboard decoder adapting for the real keyboard and the interface bus drivers coding. I blew the motherboard of the MZ700 (PSU failed and without thinking, I noted the colours of the PSU power lines and connected 12V as they were yellow+black...big mistake!). Hence converting it into a MiSter machine. 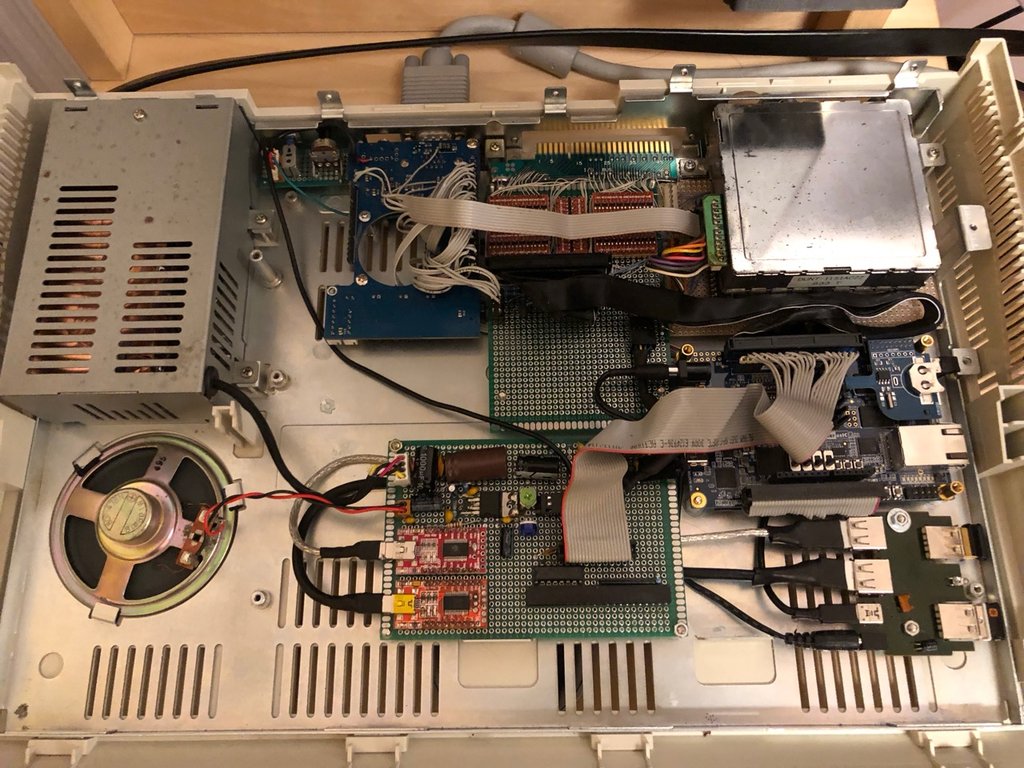 What a shame... huh... shade! That's weird, MZ-700 PSU is not supposed to offer 12V so you pick it from a modern PSU? I guess so. Anyway, keep good job and don't refrain yourself from giving us progress report (could it be a link to your blog for more details).
Top
Post Reply
18 posts