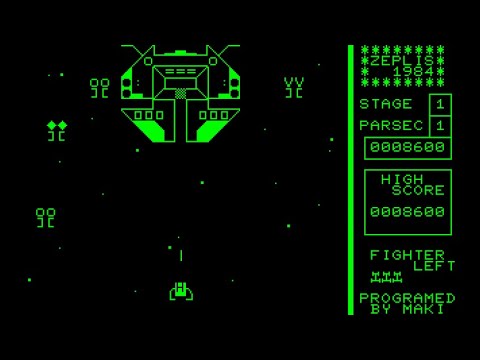 ZEPLIS (PiO February 1985 issue)
[ Story ] In
2013, the earth was about to be invaded by an unknown alien. The Federal Defense Force had lost most of its strength, but the last hope was to develop a new fighter.
Then, five people were selected to board the fighter. I was one of them and a leader. However, although they set out one after another to meet the expectations of all humankind, none of them returned.
They were brave companions. But now is not the time to think about it. I'm the only one left. The last expectation of all mankind rests on me. Involuntarily, the force is applied to the hand holding the control stick. She is wearing a spacesuit, but her hands are sweating. Calm down, I told myself. At that time, red light was beginning to appear on the radar.

[ Operation method ]
MZ-80K / C / 1200 MZ-700 / 1500 function
U, H, M, K Cursor key Fighter move
J or SPACE SPACE shot
S Game Start
A Pause
!! Return to monitor
[ Game content ]
Control a fighter and form a formation to defeat the flying enemy ZEPLIS with a shot. At the end of the stage, an enemy mother ship is waiting. If the enemy mother ship is successfully destroyed, the fighter will dock with the captured ally and power up. You can power up from grade 1 in the initial state to grade 5 at the maximum. If you make a mistake, it will return to the initial state.

After clearing the stage, there will be a challenging stage. Defeat all 20 ZEPLIS that appear to get special power-ups for each stage. In particular, if you achieve perfection in the challenging stages of stages 1 and 2, the fighter's shots will be strengthened to 3 consecutive shots until the game is over, which will greatly help you to capture.

[ Mashirahi ] Appears
when there is a score. If you get it, you will get one more fighter.